Driftfishing for Salmon in Alaska… or Row Row Row Your Boat Gently UP the Stream!

Yep — that’s when you have to get up to go driftfishing for the big salmon — which, at this particular time, were swimming UP the Kasilof River on the Kenai Peninsula of Alaska.

The Kasilof River is eleven miles south of the well-known Kenai River, (both known for their outstanding salmon fishing).

I climbed out of my warm, comfy bed at Legends Lodge, fumbled into my clothes, grabbed my down jacket to fend off the river’s early-morning cool, wet air, and made my way down the polished log staircase.

After a quick breakfast, Lodge-owner Linda drove me from Legends (which is on the Kenai River outside of Soldotna) over to the Kasilof River to meet Guide Rob and our other fishing companions.

I was about to experience another page in the never-ending story of Alaskan outdoor adventure:

High summer on Alaska’s Kenai Peninsula — just 125 miles from Anchorage — and, the livin’ and fishin’ is… EXCELLENT!!!

Other Adventures on & near Alaska's Kenai Peninsula

I’d already been horseback riding in the mountains near Moose Pass, canoed jewel-like lakes in the Alaska National Wildlife Refuge, helicoptered from Seward to the Godwin Glacier for a sled-dog-ride, kayaked in the Pacific out of the picture-book community of Seldovia (see my story “A Town Called Herring”), and walked the shoreline of picturesque Homer, Alaska.

But since I always try to include a fishing component with my travels, I was about to experience another “Alaska high”.

“If you go salmon fishing on the Kenai Peninsula, choose drift fishing”…

“If you go salmon fishing on the Kenai Peninsula, choose drift fishing” advised old friend, radio host, and Beloit, Wisconsin, fishing guide, Jim Cheadle (of blessed memory), before I left on my trip.

“It’s a slower pace and you’ll get to know your guide better than if you’re motoring on the river,” he said.

I later learned that the Kasilof River was closed to motors anyway, so only a few driftboats and some bank anglers could fish one of the top-producing streams of the Kenai Peninsula.

And, at a time when everyone else in the area was booked for the short, intense season, I was lucky to hook up with Alaska Legends’ exclusive fishing guide.

So, salmon anyone?  Yes, salmon EVERYONE!  Especially me!

At the Kasilof boat landing, Rob officiously directed us to our seats in the 20-foot, v-hulled, aluminum drift boat, which featured two individual, padded seats in the bow, two in the middle, and one in the stern, for the guide.

The boat’s unique, banana-shape is what allows the river water to rush by without moving you with it.

My fishing companions this day were two nice guys from Colorado who tried to catch their own salmon for a couple of days, but ended up with an empty boat and runny noses.

So they hooked up with Rob to do some real catchin’.

Cowboy-hat-wearing, strong-and-handsome, six-foot-tall, 190-pound, and 24-years-old (at the time), Rob told me he’d been guiding in Alaska since taking “a one-way flight” from Oregon in 1994.

Rob also told me he went to Wyoming and Montana each fall to guide for big game hunting — and do some rodeo bull-riding -- in his spare time!

Row-Row-Row Your Boat Gently UP The Stream


Driftfishing is strictly row-row-row your boat gently UP the (swiftly moving) stream, and then… let the current push you down the river as far as you care to let it… You have to be strong and skillful to captain, guide, and fish from a drift boat. And Rob was! He eased the boat from the landing, agitated that he wasn’t the first one to cast off. It was about 5 a.m. and we were on the river — mists rising in the cool morning air.

We passed under the bridge near the landing with about 20 other boats and guides doing the same thing.

Filled with anticipation, tempered by ennui from the early wake-up call, it was so quiet you could hear a pin drop… into the water. 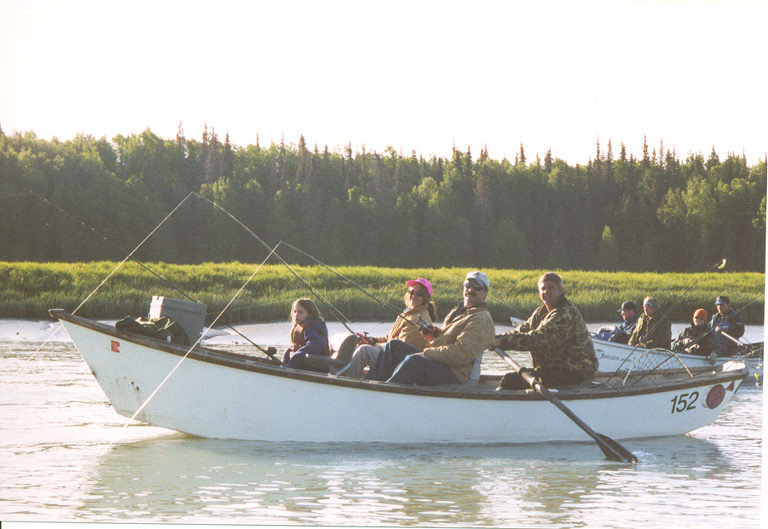 The maneuvering began, and the swift-moving current caused some close calls as the drift-rowers jockeyed for position, trying to find the fish, help their clients find fish, and respect each other’s space — all at the same time.

Rob quickly fixed our lines, adding his special attractant: Little packets of salmon eggs, cut-up sardines, and “a pinch of Copenhagen, for flavor.”

Our poles stood at the ready, in holders, with the lines streaming out about 20 feet from the bow and sides of the boat. From time to time, he dropped a special little anchor to hold us in one spot.

As long as it was still quiet, I began to interview Rob:

Rob told me he liked the attention, because “guides don’t usually get interviewed by their clients.”

“What’s important to you?” I probed, referring to his attitude about life.

Rob mused, and then said, “My most important thing is to make sure you have a good time and catch fish.”

“If you don’t think you’re the best at anything you do, then you’re not.”

Believe me, this kid believed what he said.

Mike started chanting,  “Meester Feeshy, where are you?” — and Doug and I had a good laugh every time he did this.

Doug and Mike each got strikes and missed a couple of fish.  “It’s not as easy today as it was yesterday,” Rob offered.

The tension mounted a little more as we each waited for a hit.

Then… WHOCK!  My rod bent and Rob yelled at me to grab the pole out of its holder, which I did.

I started reeling, but the line went slack.

“It’s not there any more,” I said, dejectedly.  “Yes it is,” they all yelled excitedly — “it’s made a run toward the boat! Keep reeling!”

They were right, and I kept reeling.

Soon I felt the tension on the line again, jammed the butt of the pole into my gut and kept reeling until I could swing the fish into the net that Rob had gotten ready.

And there it was, what Alaska is all about: A gorgeous, shimmering, King Salmon.

And, while happy for everyone, I was disappointed that my fish, at 15 pounds, was the smallest of the three, even though I was the first to bring one in!

“Should’ve had you guys back on shore by now,” Rob muttered.

We fished casually until we neared the boat ramp, about a quarter of a mile before the Kasilof River empties into the Cook Inlet.

(The inlet is fed by the Susitna, Matanuska, Kenai, and Kasilof rivers).

Row Row Row Your Boat Gently UP the Stream. Repeat.

Some of the other guides, including a woman guide, were in the shallow water, pulling their boatloads of clients back UPSTREAM.

(Yep, they get into the water — it’s shallow in most places — and they pull their banana boats back to make another run through ‘last chance hole’ or ‘desperation alley,’ to try to boat salmon for their clients before they reach the end of the line, again).

Meanwhile, we were at the end of our ride.

We were happy and doing high fives as Rob effortlessly winched our boat up the steep ramp.

Then we hopped into Rob’s pickup for a ride back to the first landing, where we took photos of the two Colorado guys with their salmon, and said goodbye. 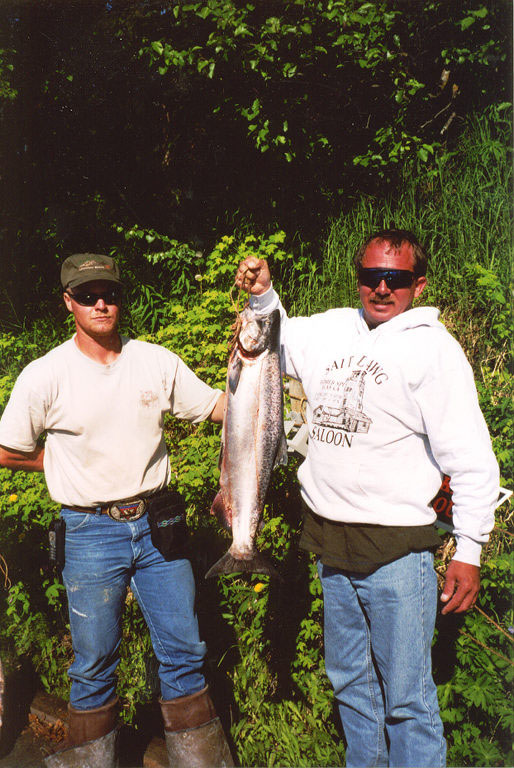 Rob drove me back to Legends Adventure Resort.

On the way, he offered me some smoked salmon sticks that he’d made himself!

Look, I had dreamed about driftfishing for salmon in Alaska, and here I was, noshing salmon sticks with a great kid and grand guide — and we were bringing home the catch of the day!

Rob pulled over. We munched, and smiled, and looked out at the scenery, including the distant mountains, and mused about life…

Back at Legends, we took more pictures.

Then Rob took my salmon into nearby Soldotna to have it processed by one of the area’s first-class plants. 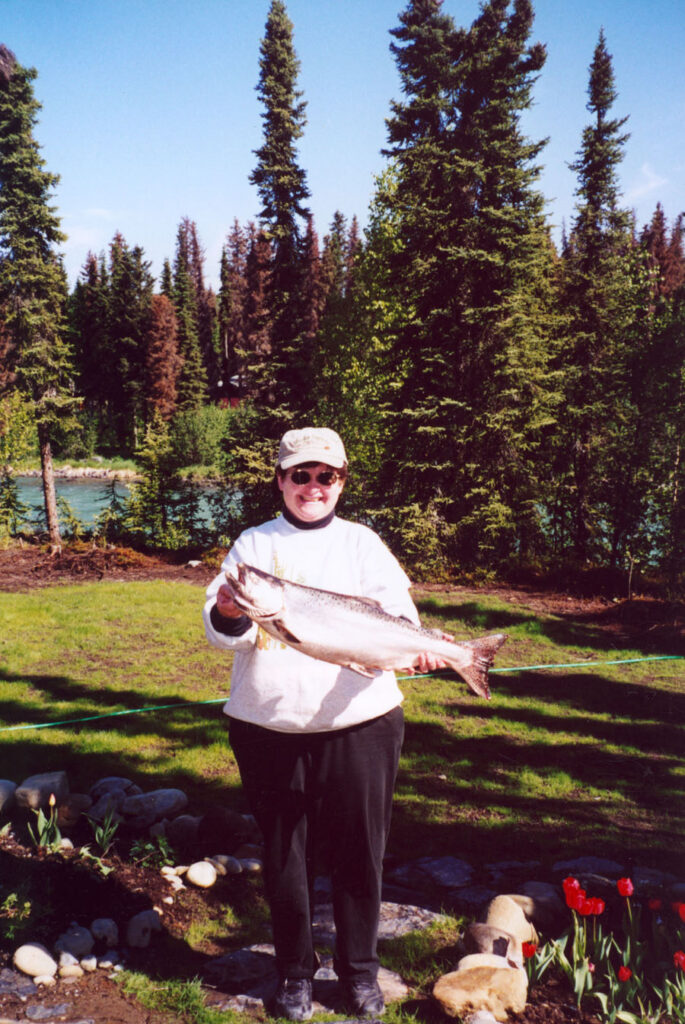 A few days later, FedEx rang my doorbell in Wisconsin and handed me a box with my perfectly-packed, frozen salmon.

The experience of drift fishing, like all of Alaska, was so special — in the most positive and wondrous way.

The Kenai Peninsula is utterly awesome, with tons of wildlife — moose, bears, and soaring eagles… great fishing, and all manner of outdoor and recreational activities.
Area activities include just about anything people can do on the Kenai Peninsula:

And, yes, there were even fishing poles in the foyer at Legends, so you could walk a few steps to the Kenai River and wet a line whenever the urge came over you.

I will return soon for another awe-inspiring Alaskan adventure — about as fast as you could say: