How Juneau’s Mendenhall Glacier Brought Me To My Knees…

By Naomi K. Cissy Shapiro
Last updated: Jan 29, 2021
SHARE TWEET SHARE
Why was I on my knees on the Mendenhall Glacier??? Well, the glacier trek experience was awesome, but I tripped and fell while the guide was “helping” me go down a small incline — and I smashed to my knees. But I’m getting ahead of myself…

When I had three days to experience the multiple offerings of Juneau, Alaska, one of my first acts was to hook up with an adventure outfitter to trek on the Mendenhall Glacier.

For this particular outing, they dress you in special gear and helicopter you out to the glacier for a unique, guided hike.

My new friend, Diane Pearson, then owner of Pearson’s Pond B & B in Juneau, and very active in the tourism community, had glacier trekked before, and joined me to provide moral support.

A guide from Above and Beyond Alaska LLC picked us up at Pearson’s Pond B & B right on schedule and drove us to a special airport in Juneau where NorthStar Helicopters & Trekking is located.

When we arrived, two couples were already there for this adventure.

And, since we’d all been asked for our clothing and shoe sizes in advance (a common procedure for Alaska outings), each person’s special gear was laid out on the floor waiting for us.

… I reluctantly gave up my backpack, jacket, shoes, purse…

But my mind raced about what to keep — camera, film, i.d., money?

Money? Yeah, right! What did I think I was going to buy on a glacier anyway?!??

Then they helped us put on waterproof wind pants, special jackets, special boots, gaiters (the accessories that cover your ankles and legs to keep out snow and ice), and a harness, which fit around our waist and thighs.

Last, they handed us a pair of fleece gloves and a fanny pack containing a bottle of water and an energy bar.

Well, the harness was too tight around my chunky thighs, and I panicked a little, wondering how would I get out of all these special duds quickly if I had to?

A picture of Harry Houdini popped into my head — but there was no time to get an answer.

They loosened my harness and I felt a little better.

After a terse orientation about what to expect and what to do (and not do) near the helicopter and on the glacier, we followed-the-leader out to the waiting six-passenger, Eurocopter A-Star.

We carefully climbed into our assigned seats (planned so that the weight is equally distributed — another reason why they ask your weight for many Alaska flights).

We latched our seatbelts and pulled on our headsets so we could hear what Nik, our pilot, had to say, so we could ask questions, and speak to each other over the chopper’s noise.

When I asked Nik about his flying background and he told us he was a retired RAF (Royal Air Force) pilot, I knew we were in good hands. (He didn’t look old enough to have put in 26 years).

Nevertheless, I conjured a picture of Snoopy in natty red scarf, or perhaps ‘Flying Jack’. With figures like this, there’ll always be an England, I thought!

Nik guided the helicopter straight up off the pad as if he were piloting the smoothest and highest elevator I’ve ever been on.

The fifteen-minute flight over the ice field was flawless and comfortable. Nik pointed out features of interest below as we made our way to the spot where our adventure would begin.

We landed right on the glacier, where Nancy, our guide, was waiting near a tent-like shelter.

It was raining like crazy (typical for September in Juneau, which is, after all, in an arboreal rainforest); but our jackets were waterproof, and it didn’t appear to affect what we were about to do.

Nancy and Nik quickly strapped crampons to our boots and offered helmets to those who wanted them. 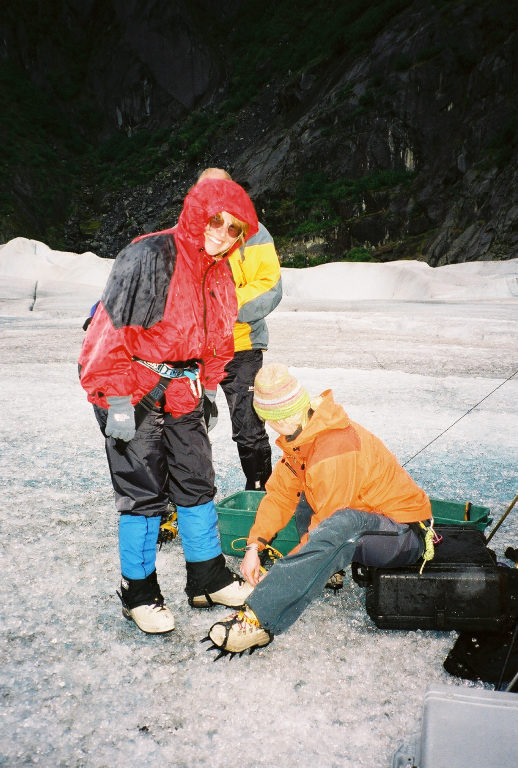 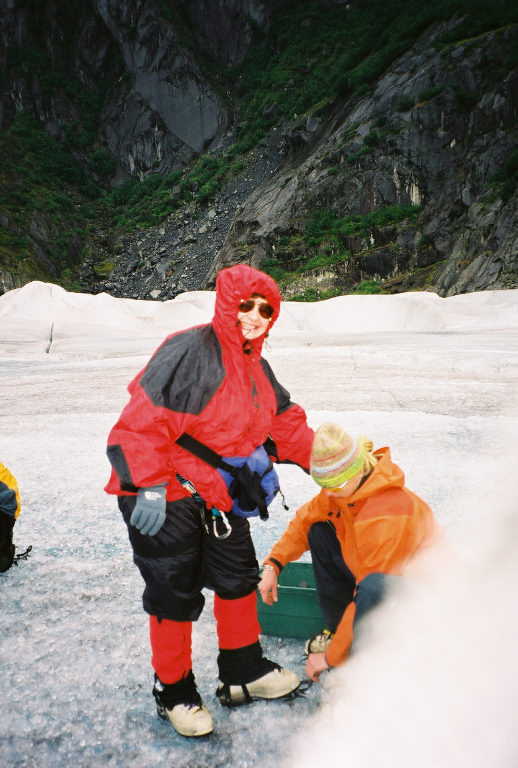 Each crampon had 10 teeth, which they told us to stamp into the marbled surface.

Then they handed us each a pick-axe, showing us how to use it for walking, balance, and extra gripping, with the flat side forward, so we wouldn’t stab ourselves if we fell!

As we tried out our new toothed footwear, we noticed that the glacier was hilly, craggy, dippy, edgy, holey, wet, slippery — and beautiful! 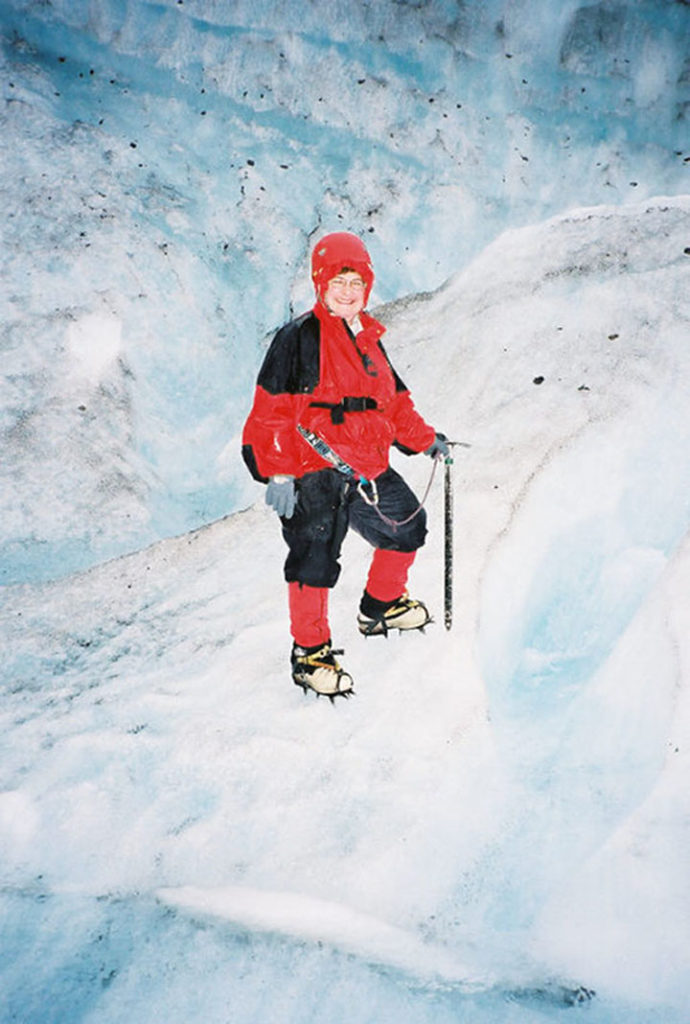 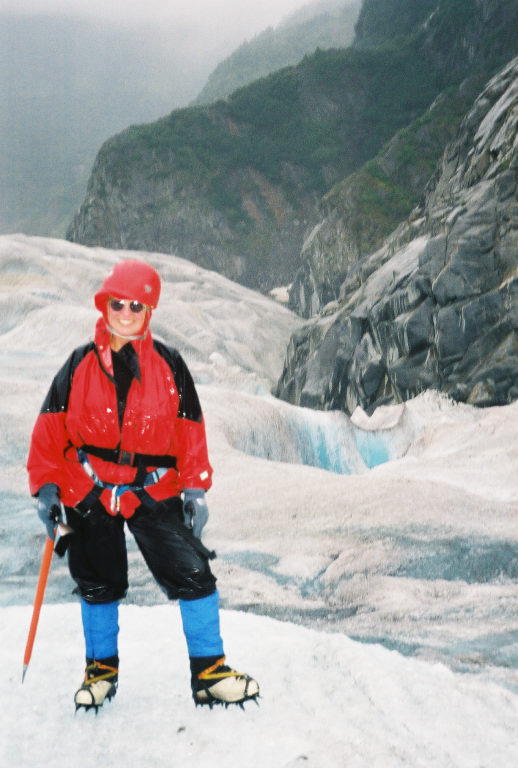 Our bright red jackets made a fashion statement that would provide great photos, but I concluded the color is more for safety (easy to see), than for the pages of Vogue.

And we were off… sort of.

Walking, even on the flatter parts of the glacier, wasn’t easy. Going up and down hills was a bit more challenging. 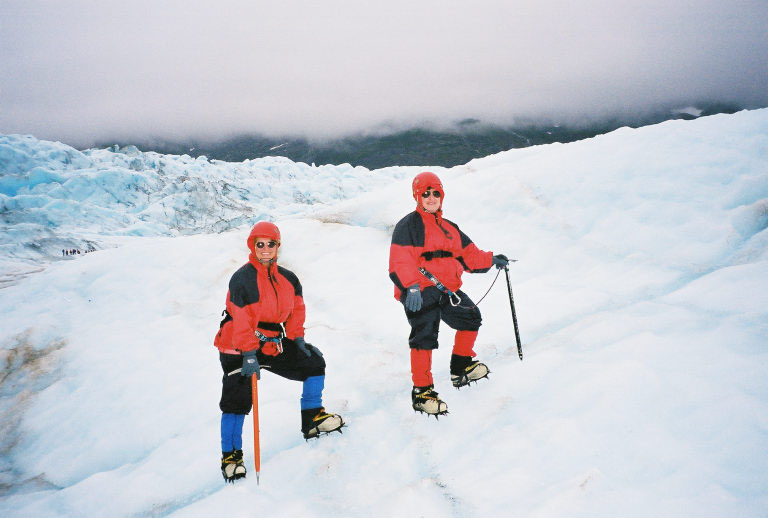 I also recommend that glacier trekkers be in “reasonably” good shape and moderately well-coordinated to manage this soft adventure experience.

Once we began to pay more attention to our surroundings, we were struck by the glacier’s stark, powerful beauty. Brilliant blue and green hues permeated icy openings.

To the far sides of the glacier were gray mountains ribboned with blue and black streaks. 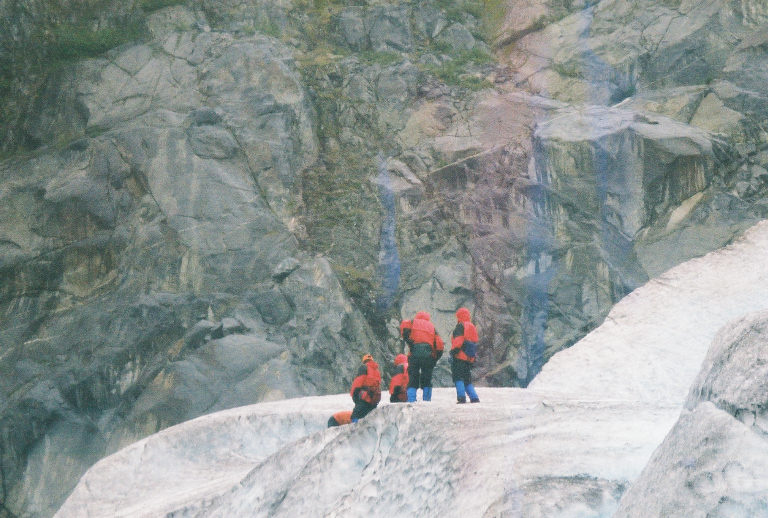 Nancy took us to the edges of moulins (French for ‘mills’) — where melting water disappeared down holes into nether regions of the glacier. 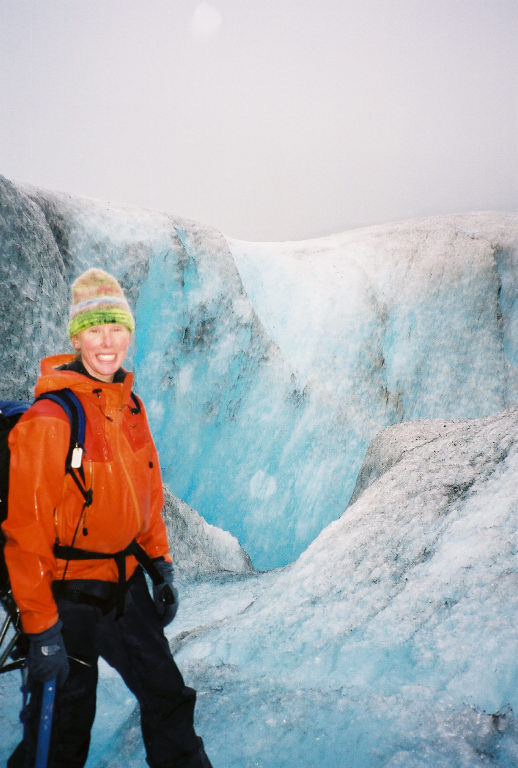 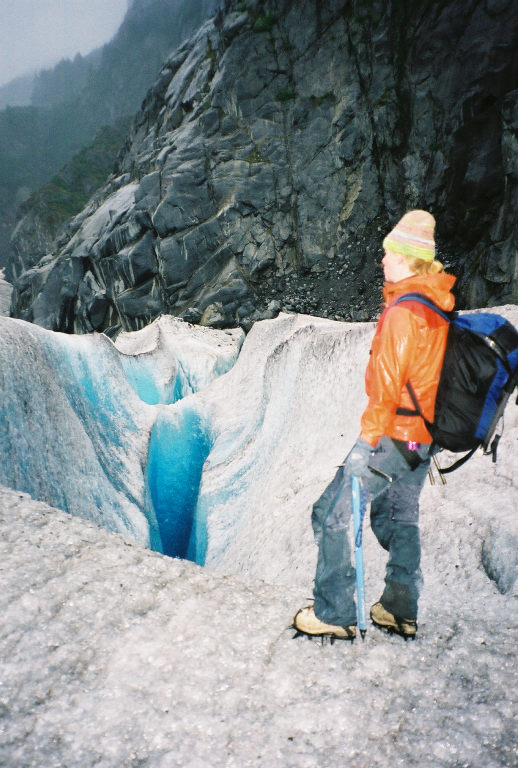 She helped us leap over narrow crevasses. She led us up and down hills — none of it as easy as it sounds.

We were all getting better, but it wasn’t exactly a cake-walk.

I hoped my photos would capture the flavor of this awesome experience.

Meanwhile, Nancy, extremely competent and pleasant, helped each of us when we needed it. 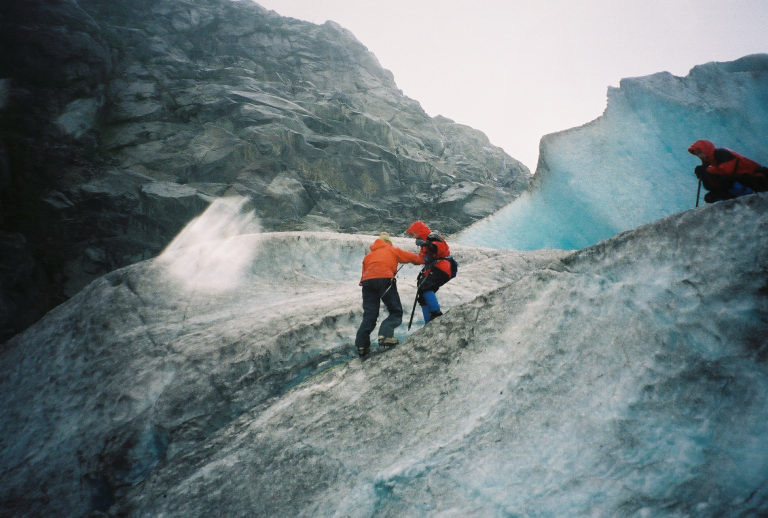 As we descended a small, icy hill, she held my harness from behind to guide me. As I neared the bottom of the hill, she let go, saying, ‘Good job’ — about one second too soon…

At that moment, the picks of my crampons locked onto the ice while the rest of me continued forward.

I immediately crashed to my knees on the marbled surface. Ouch! The others helped me to my feet. Nothing broken (but my knees were red and achy for weeks).

I wondered how Sir Edmund Hillary or any mountain or ice climbers, for that matter, did what they did, which, I can only surmise, is thousands of times more difficult and dangerous.

There wasn’t more time to think about it, because it was getting late and the skies were closing in with more rain, mist, and fog.

Helicopters came in the rain to fly us off the glacier before the weather turned worse. 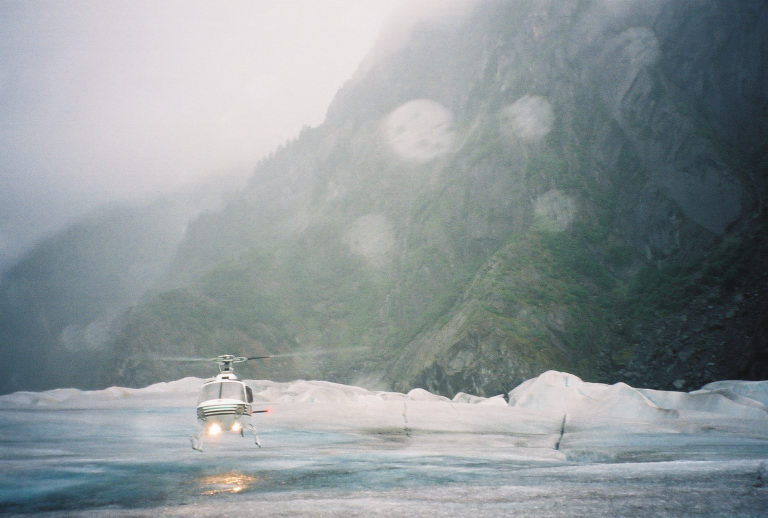 Two helicopters zoomed in to whisk us and the guides off of the glacier in a hurry. Things were getting ‘dicey’ for flying.

We clambered aboard, and, after a ten-minute flight straight back to the home base under the low ceiling, we landed gently in Juneau…

That evening, since everyone had other plans, I found myself alone with my thoughts at the warm and cozy Pizzeria Roma in the Wharf Shops in downtown Juneau…

As I basked in the restaurant’s warmth, and the chill of the day slowly left my bones… I smiled inwardly… smug and glowing about my special, new, fear-factor-accomplishment…

I had just trekked on a glacier!

On this trip, I was a guest of the Juneau Convention & Visitors Bureau, Travel Alaska, Above & Beyond Alaska, and Pearson’s Pond B&B.  None of this had any influence on the tone or content of the story